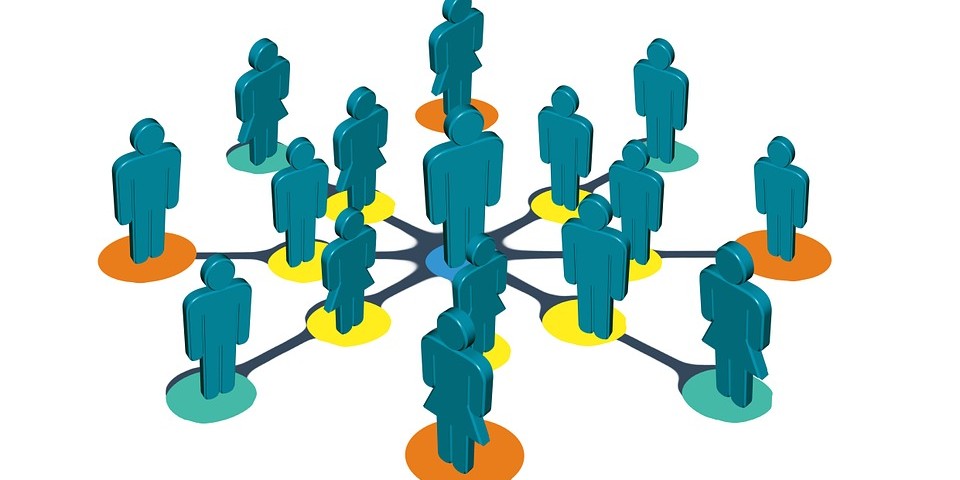 This article aims at introducing and contextualizing social impact bonds (SIBs) within the broader context of second welfare, for the purpose of outlining some aspects of these new devices in relation to the implementation of social policies that make them noteworthy[1]. Building on second welfare studies makes it possible to appreciate the renewed topicality of SIBs since the 2008 economic downturn and the subsequent austerity policies (Maino & Ferrera, 2015). Indeed, the economic difficulties and institutional legitimation that affected both the public and private sectors, even as public debate allowed some economists to rethink the relationships between the state and the market, have accelerated the process of practical change underway at least for a decade in the “frontiers of philanthropy” (Salamon, 2014). The main features of this evolution relate, on the one hand, to a systematic search for social innovation, while on the other hand, to the adoption of new governance models in multi-stakeholder networks, collective subjects to which an increasingly important role has been assigned.

In this context, new negotiating schemes have emerged that may become new policy tools (or new mixes of pre-existing tools) based essentially on specific financial architecture in which the state, market and the third sector are called on to perform a specific task. Furthermore, in conceptual terms, confirmation that SIBs might be placed within the framework of second welfare is shown by the fact that these policy tools are nothing more than means of cooperation between a number of subjects, which turn into new forms of public-private partnership (Del Giudice, 2015, Pasi 2015).

Stated succinctly, a SIB may be defined as an agreement entered into by a public authority that is willing to share with investors the savings obtained from improving certain social outcomes. In other words, a SIB is a contract with a public administration in which the latter accepts the commitment to pay for improved social outcomes such as overall cost savings for the same public administration. If the target is reached and some future savings are generated, investors are refunded their initial capital plus a financial return. The return is clearly commensurate with the degree of success achieved, i.e. the savings realized for public sector cash desks.

The basic scheme of a SIB is illustrated in Figure 1.

Thus, as the chart above shows, the main players and their roles in a SIB are:

The advantages of such an SIB scheme reside in the fact that “the public administration intervenes economically only for the rate of return achieved, thus protecting itself against economic risks; the social enterprise does not need to worry about raising capital for the entire duration of the project, so it can focus its efforts on reaching the objective; investors manage risk in exchange for an appropriate yield (Del Giudice, 2015: 46). In addition, the way they are structured, SIBs offer a reward system that makes it possible to incentivize an efficient allocation of resources, promote development and activities designed to increase social impact and raise investments in proactive social activities, which, at any rate, yield more benefits that merely the savings obtained. Thus, the SIB scheme ultimately draws a distinction between the funding and remunerative functions, while attempting to assign upfront the economic burdens to private entities and recognizing in exchange for that commitment a return in proportion to the improvements actually achieved for a certain social problem that would entail a future cost (sometimes a rising cost) for public budgets. That said, it should be noted that the SIB model is not a closed framework, which can readily be scaled up, but rather a type of partnership subject to various changes and readjustments.

Despite the changes that can be made to the model to bring it in line with the specific application context, one notes a rapid dissemination on a global scale of SIBs, which number approximately one hundred, including those already implemented and others still in the planning stage. There are about 50 SIBs, which are currently in progress. For a more analytical understanding of this phenomenon, it would be useful to examine some general data concerning the SIBs, which have been implemented to date, as shown in Figure 2.

The country that has the largest number of SIBs is the United Kingdom (24), while the area of application most frequently encountered is that of social welfare (18), followed by the labour market (13). The aggregate amount of investments made through the first experimental SIBs, even though some of these can be referred to as such only with extreme caution, given that this concept incorporates “different things” and can therefore be misleading, is about €150 million.

Aside from the accuracy of data contained in numerous reports, what seems significant is the number of replicas that the Peterborough SIB has gone through since 2010, the year when it was launched. In a relatively short span of time, this new form of public-private partnership came under the spotlight, was subject to experimental decisions and experienced the various adjustments that the various application contexts and environments required. Figure 3 illustrates in absolute terms,the growth which has characterized SIBs on a global scale over the 2010 to 2015 period. 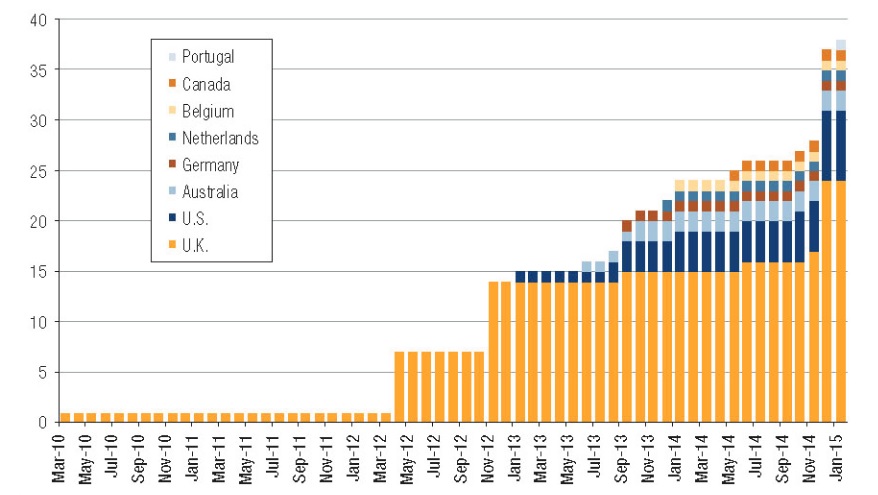 The reasons behind the proliferation of SIB schemes still need to be investigated to ascertain whether they are tools, which can be expected to become available on a regular basis to policymakers, or whether they will simply remain an interesting experiment, which has committed some governments in the search for new ways to fund social policies. Whatever the case may be, a global view shows that the onset of SIBs is not a sporadic occurrence of experiments limited by geographical extension or social issues dealt with, but rather an actual proliferation of a new form of public-private partnership marked by three elements: heterogeneity, transversality and resistance. Indeed, the wide variety of SIB forms and schemes accounts for a certain heterogeneity in their classification as a public-private partnership, given that the roles played by various partners changes considerably depending on the context and network logic underlying the negotiating scheme (while a certain difficulty remains in identifying a single precise definition for SIBs and what something different is understood to mean). The fact that SIBs are classifiable as multi-faceted policy tools accounts for their transversal nature, as can also be noted in the various social environments where they have found application (SIBSs, at least those which have so far been planned and implemented, have attempted to meet the needs of prisoners, unemployed youth, disadvantaged workers, homeless people, students, ill people, aside from tackling such problems as urban degradation and waste management). SIBs, in their original form, posit recourse to devices specifically differing from those used in the past or at any rate more complex, such as performance-based contracts and measurement of social impact, thus giving rise to institutional and political friction and possible deviations. This possible resistance to the basic logic of the tool encourages adjustments that make it difficult to identify its essential features.

The relevance of SIBs to some problems that characterize the emergence of increasingly more consistent and complex second welfare appears even more evident when considering their connection to austerity policies in the wake of the 2008 economic crisis. One of the mains areas highlighted with reference to spending review processes in various countries relates to the risk that budgetary reasons may turn into a series of linear cuts. Far from being an ongoing and primarily regular solution, SIBs still represent an attempt to remove the contradiction between the need to review social (public) spending and the urgent nature that characterizes some social needs. Mainly for this reason, SIBs seem destined to play an important role in the experimental practice of innovative social policies in the coming years and the institutionalization process of this tool would push second welfare towards an organizational and political complexity that would result in a hybrid form between economic action and social action (no longer just barely private-public), thus developing the potential to impact the very limits of the idea of a “welfare system”. This implies a number of crucial challenges especially for public governance, once again underscoring the central role of virtuous nesting between first and second welfare (Maino&Ferrera, 2015). In this respect, the rollout of SIBs, while blurring even further the nuances that join these two dimensions, has been shown to be a valuable opportunity to deepen our understanding of this issue.

Brookings (2015), The Potential and Limitations of Impact Bonds:Lessons from the First Five Years of Experience Worldwide, Washington, Brookings. 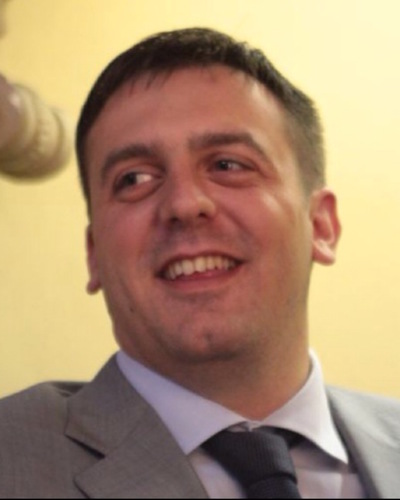