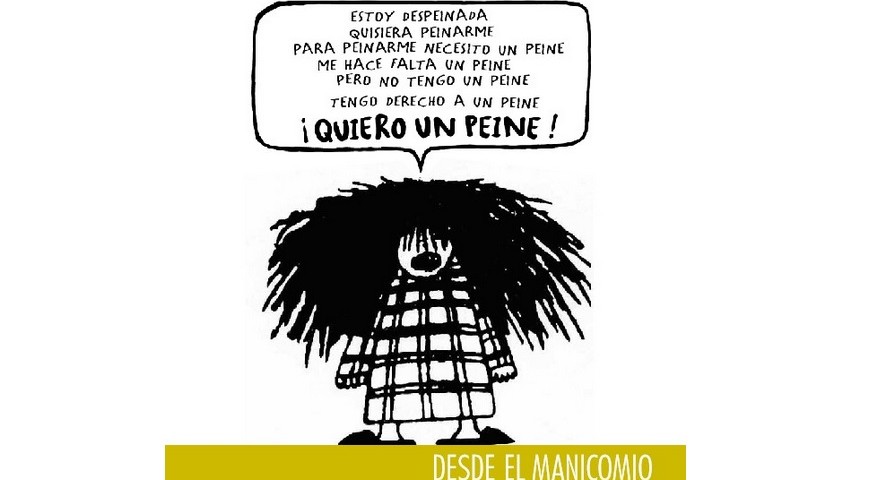 In 1979 Franco Basaglia gave a series of lectures in Brazil: in São Paulo and in Rio de Janeiro in June, and in Belo Horizonte in November. They were some of the last occasions he expressed his thoughts in public and they still have a very considerable impact today, even on those approaching the topics of psychiatry and its institutions for the first time. The visits Basiglio made to the Barbacena and Jaqueri Psychiatric Hospitals in Minas Geraisand São Paulo respectively, “places of death”, made a deep impression on him. He was to say, “there are situations in which it is impossible to find solutions of compromise because if we do we are making a compromise with death, and there is no possible compromise with death.”

The lectures resonated very strongly with the practitioners and the citizens present: Brazil was experiencing an important period of struggle in the transition towards democracy and those lectures certainly contributed to triggering off the process that led to the formation in this country of an important movement for psychiatric reform. Franco Basaglia’s strong urge was to succeed in organizing a network “like a cement that could unite people all over the world who want to work in a different way.”

By extending the field, we can perhaps state that the lectures were precisely the starting point for a path which still runs between the Italian experience of deinstitutionalization, in particular that of Trieste, and Latin American countries. Naturally central in that process of anti-psychiatric hospital struggle was the Caracas Conference in 1990, strongly desired by the PAHO-WHO, the international agency for public health and regional office of the WHO and organized with the technical and financial collaboration of the Mario Negri Institute of Milan, in particular Benedetto Saraceno. Many Latin American countries attended this, including Brazil, Argentina, Chile, Mexico, Ecuador… The Caracas Declaration approved by the Conference stressed the need for legislative innovation in mental health and on the passage from the psychiatric hospital to a network of community services.

In Latin America, Brazil is definitely the country that has implemented the most significant transformations in the field of psychiatric care. Since the end of the 1970s, there has been a slow but progressive process in the country which, while not having yet led to the abolition of psychiatric hospitals, has greatly scaled them down, the most important example in the world, and the development of local mental health services and innumerable socio-cultural experiments for the inclusion of people in a state of psychic suffering have been developed.

The relationship between Brazil and the Trieste experience, including due to the very intense relations that Franco Rotelli[1], who succeeded Basaglia in November 1979 as head of the Trieste mental health services, had with this country, is particularly significant and underwent strong development in the 1980s. There are innumerable operators, students and politicians who in those years visited the Mental Health Department in Trieste[2] or trained there for a medium-long period. They included Ana Pita,who opened the first Mental Health Centre in São Paulo in 1987 and Roberto Tikanori, today at the head of the national Mental Health Programme, and Fernanda Nicacio,who implemented the first experience of dismantling the psychiatric hospital of Santos and opening a network of local mental health services.

Franco Rotelli was invited, as were other members of the Trieste équipe, on many occasions times to various states in Brazil to pass on their experience. The first state laws on mental health were passed in those years (in Rio Grande do Sul, in Pernambuco, in Ceará, in Minas Gerais), until, after much opposition and struggle, the federal law on the reform of mental health, which was strongly inspired by the Italian law of reform(Law180 of 1978), was passed in 2001.

Practitioners, trainees and academics continue to have a steady relationship with Italian experiences and in May 2014 in Campinas, the University of Marilia organized, together with the Department of Mental Health of Trieste, the first Franco and Franca Basaglia International School, with important interactive exchanges with the local services.

Several declarations of intent have also been signed since 2010 between the Conferenza Basaglia[3]and Brazilian municipalities and universities, the last of which, currently being signed, with the Observatório Nacional de Saúde Mental e Justiça Criminal do Instituto de Psicologia da Universidade Federal Fluminense – OBSERVASMJC/UFF – (Rio de Janeiro-Brazil) for theoretical and scientific exchanges and theoretical and applied research, in particular on the subject of superseding the judicial psychiatric hospital, under way in Italy.

The other countries in Latin America that have looked with interest at the Italian experience of deinstitutionalization that we want to examine here are Argentina and Ecuador, with which the Conferenza Basaglia still has intense exchanges.

At the end of the 1980s, under the impetus of the Pan-American Health Organization, a group of the heads of psychiatric services in some states of Argentina spent a long period of training in the local services of the Mental Health Department of Trieste. They included Ugo Cohen[4]who, together with the psychiatrist Graciela Natela, promoted the important experience, even though it was limited from the quantitative point of view, of the deinstitutionalization of the Psychiatric Hospital of Rio Negro.

In November 2010, Argentina, after long work which involved the original équipe of Rio Negro, the Pan-American Health Organization (OPS), the Network of Good Practices in mental health, health and innovations of the welfare state (the focal point in Argentina of the Conferenza Basaglia today, the Conferencia Basaglia Argentina), approved the law on mental health reform, which also looked towards the Italian law. The law, completely focused on the respect of rights, on closing psychiatric hospitals and on inter-disciplinary work in mental health, was strongly opposed by professional lobbies, in particular of psychiatrists, and still comes up against obstacles and resistance in application today. Argentina still has about 20,000 patients in psychiatric hospitals, although practices of quality and answering needs have been started in several points.

In November 2010, representatives of the Conferenza Basaglia took part in the final and evaluation phase of the “Isole” European Union project on social and working inclusion, promoted by the NGO,CISP. On that occasion, the delegation was also heard on the proposal to reform the law on mental health by the Commission of the Senate.

Today Conferenza Basaglia is the partner in a project of social integration for people with mental disorders in Argentina, in particular in the provinces of Buenos Aires and Salta, approved by the Friuli Venezia Giulia Region. The aim of the project is to support the process of deinstitutionalization of psychiatric hospitals and the establishment of mental health services in the local area.

As part of the EUROsociAL II programme, the Conferenza Basaglia and the Department of Mental Health of Trieste have taken part in an activity for the social and economic inclusion of people with mental disorders[5] in Ecuador.The result of the activity is the implementation by the Ministry of Social and Economic Inclusion (MIES) of an innovative pilot service for 50 people with mental disorders and their families in the province of Santo Domingo de los Tsáchilas..

In Ecuador, people with mental disorders, especially those in conditions of poverty, have few opportunities for attention, both regarding health care and social inclusion. Ecuador, despite having made a considerable commitment in the past few years to people with disabilities, after the ratification of the 2006 UN Convention on the “Rights of persons with disabilities”, has not included in this action people with mental disorders. They continue to be the “last of the last”. These people at times are not known and recognized by the public institutions and, together with their families, remain in the shadows, abandoned and forgotten, or they are interned in public or private institutions, or imprisoned. They mostly remain dependent on their families, for as long as the latter can support them. At times, the families, due to the great burden of the ill family member, without any help, fall into a situation of social drifting, or into illness of the other members of the family. In this context, in the period between 2013 and 2015,the Ministry of Health was engaged in formulating a national Strategic Plan of mental health for 2014-2017 and a Model of attention for mental health, in which the Trieste experience is quoted as a source of inspiration.

The work of EUROsociAL has taken place through an important cultural and political action which involved several Ministries, including those of Health and Economic Development and many other institutions, for the recognition and support for the needs and unfulfilled rights of people with mental disorders and their families, to go from exclusion to inclusion.

[4]He then became head of the mental health sector or the OPS until 2014.

[5]Expert practitioners made two trips to Ecuador in October 2013 and in February 2014 and two distance trainingsessions were held for MIES practitioners in 2014 and 2015.

Giovanna Del Giudice, a psychiatrist, started to work in the psychiatric hospital of Trieste under Franco Basaglia in 1971. She took part in the whole process of deinstitutionalization and the construction of the community mental health paths, with special attention for the topics of gender. She has been Director of the Department of Mental Health of Local Health Authority Caserta 2 and of Cagliari and a consultant for mental health in other Italian regions.

She has been President of the Conferenza Basaglia association (COPERSAMM) since November 2013. She coordinates projects of international cooperation on mental health.