‘Reciprocamente’ spoke with Carlos Pose, Director of Health in the Canelones province (Uruguay) where, in recent months, there have been several agreements signed relating to the complementarity and integration of public-private services. This type of agreement allows for the creation of a ‘single emergency access point’ at the first level of care. It is aimed at the optimisation of human resources, materials and logistics, with the objective of improving services provided to the public, beyond the particular health provider with which each person is affiliated.

Can you briefly describe to us the main characteristics of the Uruguayan health service up to the first few years after the new millennium (the creation of benefit societies, fragmentation of the system, access to healthcare, the role of the state, quality of services, etc.)?

Before our country’s health system was reformed it was clearly fragmented. There was a great disparity in both the accessibility and quality of the different health services. The implementation of neoliberal policies from the mid 1970s, the consequent decrease in public spending, and the push to create a culture based on competition, widened and increased the differences between the public subsector and the private sector, and also between the various private institutions. All this resulted in the closure of several institutions, job losses in the medical and non-medical sector, a progressive decrease in salaries, the discontinuation of services for thousands of patients, and an exponential increase in technological expenditure. The public subsystem was the most affected by these policies, with a decrease in investment and a decades-long delay in facility maintenance, a lack of many medicines, and the loss of dignity in both the services and the profession. It became a purely episodic service provider centred on acute pathology.

All of this was detrimental to the promotion of health and healthy lifestyles and placed little emphasis on the first level of care. It also resulted in the disappearance of the general practitioner as such and the subsequent loss of the continuity of care and patient follow-up. Linear attention, continuity of care, and integrality are attributes of primary care that are essential to guarantee quality of attention. A health problem does not have a single cause and social circumstances play a big part, this is a concept that requires each individual’s personal background, their community and the family nucleus they are a part of to be taken into account. None of this was present before the reform, except in a few isolated cases.

Disruptive conducts within the doctor-patient relationship became ever more frequent. The medical sector also embraced the competition culture, the establishment of corporatism and the emergence of entrepreneur doctors devalued the system even more.

Can you tell us about the main healthcare reform guidelines initiated at the beginning of 2005, the creation of the Integrated National Health System (Sistema Nacional Integrado de Salud), the purpose of FONASA (National Health Fund) and its main objectives? In what way does this reform stimulates public-private service complementarity agreements?

Without a doubt the reform was, culturally, financially and with regards to service provision, a revolutionary change in the healthcare system, and, just like any such change, it must be understood that once it has been put in place it should be permanent. The change in the management system, enabling through the National Health Board the participation of workers, users, institutions, etc., separating the Ministry of Health from service provision and instating it as a governing body, administrator, and generator of public health policies, democratised and strengthened management. The same thing applied to the financing system with the constitution of the National Health Fund (FONASA) which, besides giving stability to the system and to institutions, increased the number of people using the health system from 600,000 (before the reforms) to more than 2 million, with an increase in equality and accessibility for almost the entire population. The system changes with regards to attention, prioritising the first level of care, prevention, attention centred on the person, effectiveness, health promotion, and linear attention. This area, perhaps, even though much progress has been made, is where further progress can and must be made. These are possibly the three most important pillars, but there are others.

The stability generated by the reform, the creation of a governing body with clear rules which is not responsible for service provision, and a change from the idea of competition as success, have been fundamental in implementing complementarity.

In general terms, what does a complementarity and integration of public-private services agreement consist of?

What we want is for institutions to supplement each other instead of competing with each other, and the stability gained from the reform allows us to make progress with that. We are trying to move towards a much more efficient and intelligent system, as much for the users as for the institutions, optimising human and material resources existing in the area and using them to improve accessibility to health services for everyone. We don’t believe that competition makes us better, we think a system based on competition is primitive; it overstretches resources, raises costs, generates inequality, and above all it benefits the most powerful to the detriment of those who are weakest, be they institutions or individual users.

Apparently, the agreement signed in Progreso (Canelones, 2014) was one of the first and included the most institutions at a national level. How long did negotiations last? What were the main components of the agreement? Which aspects were the toughest to negotiate? How is working out one year on, according to the different participants? To what extent did the Los Cerillos agreement benefit from previous negotiation experiences? Do controversies exist in Uruguayan society about this kind of agreement?

The Progreso agreement was and still is the agreement with most participating institutions at a national level, with seven institutions in total, followed by the Los Cerrillos agreement with six institutions. Negotiations to reach agreements like these take a long time – months or years. The important thing is to be firm and to generate trust between all parties involved. It’s difficult because, as I said earlier, it involves a cultural change. It’s not easy. The important thing is not to abandon the negotiations, to remove any obstacles that might arise, to speak clearly and generate trust between all parties involved and, above all, that there be a follow-up committee formed by the governing body, institutions, users, and also for the first time we are aiming for the participation of the third level of government through municipalities, which will meet periodically to resolve any conflicts which might logically arise. Canelones is the province with the greatest number of complementaries already in place and working at a national level. The first stage of our policy was aimed at making sure that no one, even in the most rural areas of the province, would have to travel more than 10 kilometres at any hour of the day to access emergency medical attention. Even though the most important public provider (ASSE) has substantially improved its services in recent years, as much in accessibility as in logistics and the first level of care, it’s also true that in some parts of the province, especially the most remote ones, services were not available after 6 p.m. or 8 p.m., after which timepeople had to travel great distances (sometimes up to 30km) for medical assistance, and the population from those localities are the most vulnerable. That was our first challenge. Luckily, and occasionally it was not so much a case of luck as it was hard work, we managed to have complementarity agreements in place in San Luis, Atlántida, Sauce, Suarez, Montes, Migues, Progreso, Los Cerrillos, Santa Rosa, San Bautista, Toledo,and we are working and making progress in San Jacinto, Salinas y Barros Blancos. At the second stage our intention is to strengthen each of the province’s general hospitals, focusing above all on the most remote which provide services to the rural population, and we have managed to put in place some very interesting agreements there. For example in the Campo Militar area where there was a dental surgery which only served members of the military. We have managed to open this up for everyone’s benefit, and this surgery, which formerly only provided services to the army, today also receives patients from the ASSE and a private institution, and as a result services now include vaccination, midwifery, paediatrics, general practice, etc. doubling the hours of availability of general medicine. The same has been achieved in Paso Pache, Canelones city, and will soon be the case in Aguas Corrientes, Santa Lucía, etc. It’s impossible for a soleservice provider to achieve this, but together it is clearly possible and it will not increase costs for institutions but will always benefit users.

Every materialised agreement benefits from previous agreements. It’s a new thing, and there is something to learn from each one. Each agreement is different, with different providers, but we draw as much experience from errors and obstacles as we do from achievements. They make each other stronger. Private providers also learn from the experience and there are already agreements between private providers which we hope will multiply, as in the city of La Paz between the CCOO and the Evangelical Hospital, or between the Casa de Galicia and the Asociación Española in Las Piedras. With respect to controversies, of course they exist. As I said earlier, it’s also a cultural change, and cultural changes are difficult and meet with resistance. In spite of this we are making progress and it has to be done like this. We have to insist, to be consistent, and not give up even though it takes time to achieve. You can’t win a fight you walk away from. 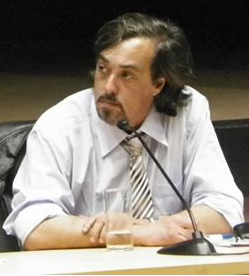 Carlos Pose was General Secretary at the Local Board of the city of Los Cerrillos (2005-2010), General Director of Environmental Management of the Comuna Canaria (2010-2011) and has been Departmental Director of Health at Canelones Ministry of Health from 2011 to the present date.